One of Johann Strauss' most well-known works, arranged for string trio by the Aleksić String Trio. 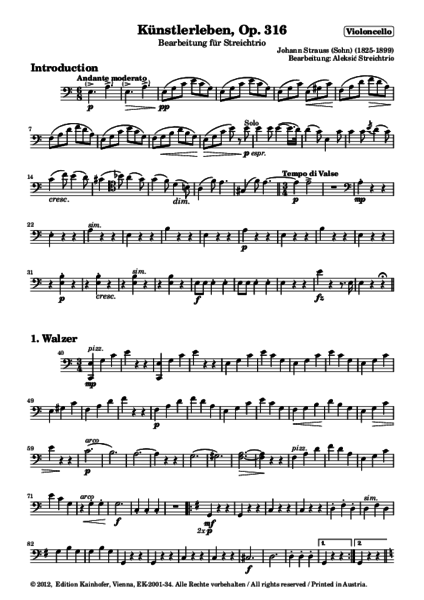 Johann Strauss's waltz "Artists' Life" is among his most well-known works. It was written in 1867, a somber time in a Vienna that otherwise liked to party exuberantly. Only a year earlier, on 3 July 1866, the Austrian army had suffered defeat at the Battle of Königgrätz, a decisive encounter in the Seven Weeks' War against Prussia. The loss effectively excluded Austria from a Prussian-dominated Germany. Given the gloomy mood that subsequently prevailed in the imperial capital, numerous balls and other events involving dancing were cancelled during the Vienna carnival season of 1867. The brothers Strauss, however, cleverly wrote lively new works that countered the mood.

Two slow introductory bars in minor are followed by the first solo passage in major, which leads cautiously but relative quickly from a gloomy atmosphere to the exuberant mood of the waltz. Over the further course of the work a melancholy mood returns but is always overcome by gaiety. We will never know for sure whether this change of feeling was supposed to reflect the artist's life of the title or was meant as a reference to the general mood of the day.

The waltz form here is in the sequence typical of Strauss: a slow introduction followed by five pairs of waltzes and finally a coda. The latter is unusually long for the genre, taking up and elaborating all the previous waltz themes. Strauss also takes greater liberties in the structure of the five pairs of waltzes, creating thematic links between them.

The present arrangement for three string instruments was made by the Aleksić String Trio for use as an encore at their concerts and other appearances.

The length of the entire arrangement is nine to ten minutes (despite the omission of the da-capo repeats in Waltzes 1, 2 and 4) and can also be played in an abridged version that reduces the playing time to ca. five minutes.

There are yet no reviews for this product.